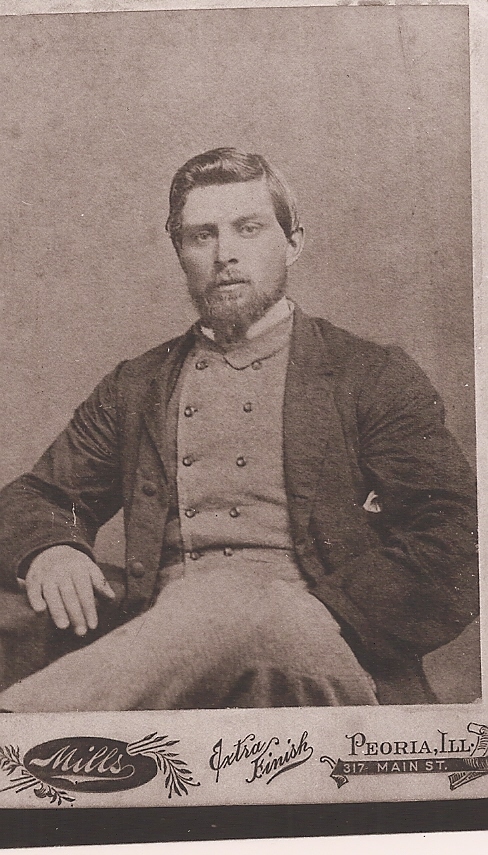 Thomas Edward Thompson was my paternal grandfather. He was born 27 July 1843 in Sangamon County, Illinois. He was the second oldest of eight boys and one girl. When he was 13, the family moved to a farm near Albia in Monroe County, Iowa. They lived there for the next five years until 1861. That February Tom’s mother died at age 39. The Civil War began in April. Tom turned 18 in July. After the fall harvest his older brother went west to ride for the Pony Express. Tom traveled east to Bushnell, Illinois. On 6 October 1861 Tom enlisted as a private in Company F, 55th Regiment Illinois Infantry.

After two month’s training at Camp Douglas in Chicago, his regiment left camp and marched in a grand parade in downtown Chicago. The 55th was the first regiment assigned to General William T. Sherman and subsequently closely associated with him. Tom was in all major battles of the Army of the Tennessee, including Shiloh, Vicksburg, and the Atlanta March to the Sea. His duties were as mounted orderly at Division Headquarters under General Sherman and General M. L. Smith. He served 3 years
5 months and received his Honorable Discharge on 26 March 1865, in Greensboro, NC.   He was given the Distinguished Service Award.

He returned to Illinois where he met and married my grandmother, Barbara Ellen Puterbaugh. They had nine children. He was a policeman with the Peoria Police Department and a member of the Grand Army of the Republic (GAR) Bryner Post 67, Peoria. He died at age 48 on 8 March 1892. He is buried in Springdale Cemetery Peoria, Illinois.

Tom …was the night driver of the police patrol…one of the best known,

most popular and efficient officers on the force. He was one of the best shots

My father, Jesse Calvin Thompson, was 3 years old when his father died. He was the youngest. He grew up in Peoria and met Mary June Thompson, with the same last name, but not related. They were married in 1917. I am the youngest of their 3 children. I was born in 1934, when my father was 45 years old.