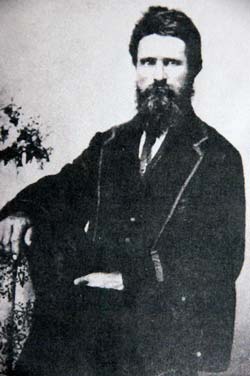 John Lewis Benson was born February 16, 1835 in Mercer County, Pennsylvania. He volunteered into Company E, 5th Kansas Cavalry, at Fort Leavenworth, KS from 1861 to 1864. He reenlisted as a vet volunteer and mustered out with his detachment on June 22, 1865 at De Valls Bluff, Arkansas.

John married Sarah Elizabeth Chandler on April 4, 1866 in Eureka, KS. He was active in civic affairs and held many positions, including postmaster and judge. After a flood and the “year of the grasshoppers” which ruined their crops, they moved to a land grant in Fowler, Meade County, Kansas. He was left with four small children when Sarah died at age 29.

About this time, Malinda Pinnick Dame divorced her husband. She had two children. John and Malinda were married in January 1881 in Eureka, KS. They moved back to Fowler to the homestead where they had two sons and a daughter, making a family of nine children. After a prairie fire, and John’s failing health, they sold what was left and went south to join the rush for Oklahoma Territory. They settled near Guthrie and started a farm. They donated land for a school and cemetery. John died at home and was buried there in 1906. When the farm was sold, he was moved to the Summit View Cemetery in Guthrie, OK.

“J. L. Benson (John Lewis Benson), aged 71, died at this home 6 miles southeast of Guthrie (Oklahoma) yesterday morning (March 23, 1906). Funeral services will be held tomorrow at the home and interment [sic] will be made in the family cemetery. Mr. Benson is a prominent G.A.R. man and several of the members of the Guthrie lodge will attend the funeral. He leaves a wife and two sons.” 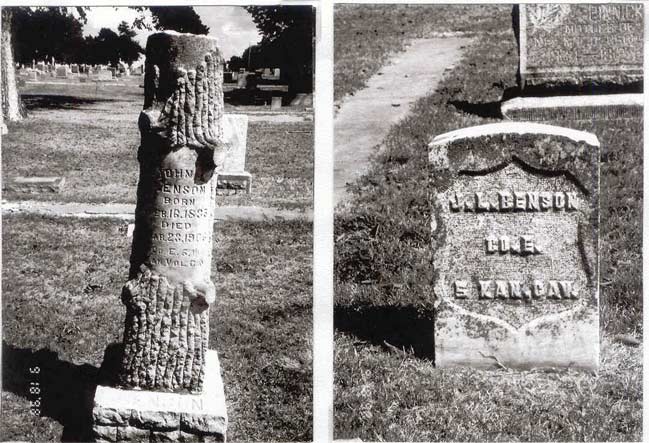