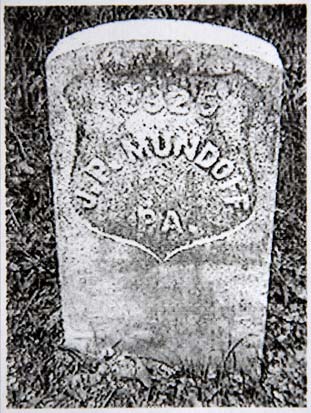 Born in 1812 in Adams County, Pennsylvania, John P. Mundorff enlisted in Company D of the 83rd Pennsylvania Volunteer Infantry. After the Battle at Antietam he died of typhoid fever on October 28th 1862, in Frederick, MD. He was buried there and later was moved to the Antietam National Cemetery in Sharpsburg, MD.

Mundorff was married October 27, 1837 to Clarissa Snyder in Franklin County, PA. She was born in 1813 and died October 8, 1897 in Bolivar, PA. When he died she was left a widow with 10 children. Their sons, Henry, William, and Gibson also volunteered for the army. Henry was killed, May 1864 at Bethseda Church, Spotsylvania, VA. Gibson and William survived the war.

John Mundorff’s headstone is a typical vintage marker procured in quantities for soldiers’ graves. Their deterioration can vary significantly as John’s marker is relatively well preserved compared to some of the other in the cemetery. This particular military cemetery is a quiet place, since it does not get too many visitors, like Arlington and Gettysburg. The quiet surroundings of the small town of Sharpsburg enable one to allow the mind to wander and to envision the place and time of September 1862. A visit to the Antietam National Cemetery is a rewarding pilgrimage.