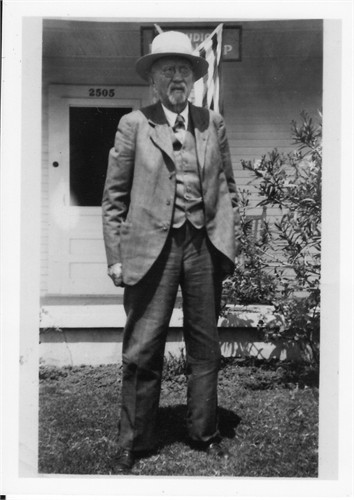 Daniel Webster Hixson was born December 23, 1843 on a farm near Burlington, Henry County, Iowa. He was one of seven children born to John and Mary (Burnett) Hixson, and grandson of David Hixson, a Revolutionary War soldier. Daniel and his brother, Noah, both enlisted in Company C, 30th Iowa Volunteers, which was attached to the Fifteenth Army Corps. They participated in many battles, including the Siege of Vicksburg, where Daniel was wounded on the second day of battle, May 22, 1863. He was hit in the left arm by a bullet, pitched backwards, and tumbled down a hill out of range of the guns. He made his way to an aid station and was evacuated to Vicksburg hospital, the first man to come in. The doctors wanted to amputate the arm lest he dies of gangrene, but he flatly refused. Although he kept the arm, he was left with scarring and limited use of his left hand.

He returned home to Iowa, married Helen Orr, daughter of a wealthy land owner, and had three daughters. The family moved back and forth between Minnesota and Iowa. In Minnesota, Daniel was elected a state representative in 1886 and served for two terms. He was prominent in establishing the Grange, was active in fraternal circles, was a Mason, a Knights Templar, and a member of the Chippewa Club. In later years he moved to San Diego, and spent his final years after 1927, living in Los Angeles with his daughter, Capitola, and granddaughter, Joan. He was a member of the Grand Army of the Republic, Stephen Jackson Post 191 in Santa Monica and often attended GAR meetings at Patriotic Hall in downtown Los Angeles.